Although there's not much in the way of real Hallowe'en festivities here in the French countryside, in the nearby city of Ales this morning I noticed pumpkin&witch decorations in a few shop windows and in the big supermarket. Here, the real holiday is tomorrow, TOUSSAINT (All Saint's Day) when schools and businesses are closed, and people visit cemetaries to embellish the graves with flowers -- usually pots of chrysanthemums but cyclamens have become more popular in the last decade or so. Still, it is mainly mums, and so much associated are they with the act of honouring the dead that they are not acceptable as hostess flowers (bringing a bouquet when one is invited to dinner is more the custom than bringing a bottle of wine, for the latter implies that you don't have confidence in your host's cellar).

It's rainy and cold, and I hear that it's rainy and cold in Toronto today too, which makes the trooping around neighborhoods in costumes a bit dismal for all concerned, little kids and big kids and parents alike. And with the city still recovering from the impact of the last few days' storm weather, this may be a Hallowe'en to avoid and forget.

Until today we've had good weather here,and the vineyards are starting to colour up nicely. It's not exactly the Gatineau show of maple and beech and birch glowing ruby and gold, but it'll do, it'll do...
Given the rainy weather today, I've spent a bit more time at my desk, and want to pass on some very interesting writerly blogs here that can provide enjoyment and information if you have the wish to investigate. One is by an American friend of mine in Michigan, Michael Steinberg, whose blog focuses on non-fiction writing (this is his specialty, both as writer and as teacher). Do have a look

Another one you shouldn't miss is a site devoted to science writing by a terrific Canadian writer, Kimberly Gerson...  A few years together we worked together in the Humber correspondence program, and I have an enormous amount of respect and admiration for the way she embraces the natural world...Expand your horizons and check it out

And the last one here I've just begun exploring, it's called PICKLE ME THIS by a Toronto writer and teacher and critic whose name is Kerry Clare. I was sent it by my friend Susan Swan (whose new novel THE WESTERN LIGHT is a must-read, especially if you were a fan of her earlier novel THE WIVES OF BATH but even if not...), so that I would be aware that my collection THE ELIZABETH STORIES, nearly 30 years old, is still having a life. Ah, there's nothing so satisfying for a writer than to know that a book continues to be read.

So as October draws slowly to a close, the season of  ripe fruitfulness does likewise, and I find myself making grape jelly again -- as I do every year, using the grapes from the vine that winds itself up the brickwork beneath the front terrace. It has always been here, and I feel a kind of housewifely obligation to use what it yields for a few jars -- 6 this year -- of dark purple jelly, shining and brilliant on the spoon before it melts a little on the hot toast, or blends itself into a pot of yoghurt. It is a crazy "waste of time" in some ways, as it is so labour-intensive, but aftrer a few hours of picking, sorting, smushing, boiling, dripping through a muslin bag and boiling again, pouring into jars and sealing with wax, voila! writing the labels to stick on the lids, I have an enormous feeling of satisfaction. Here are the grapes, pre-jelly.

﻿
Now there are still lots of apples in the cellar for making apple sauce, and apple pie (particularly Aunt Christine's Apple Pie, a big favorite with Mas Blanc guests), and there is a large bag of almonds ready for someone to crack during the Christmas season. The apricots are now happily jammed in jars with a few marischino cherries for colour, and the plums? well the plums didn't do well, same as the cherries that were eaten by enormous beetles -- done in by forces of nature.  It'll be a bad year for the olives this﻿ year too, on account of that freeze that came in February, and I am not even going to try to gather them, as there'll not be enough to make a difference at the mill. There have certainly been some happy days picking olives in the past, but not this year. I can never spend time out among the olive trees without missing Bob, my husband of 40 years, who was so much part of this place, Mas Blanc.

﻿
The last of my visitors has been taken to the train station in Nimes, and now there is a quiet period of reflection to go along with the work of cleaning up the garden and finishing the painting of the shutters -- the wood is always painted blue, and the job is being done this year by my friend David, partner of my friend Patricia... whereas I am painting the metal hinges and bars with shiny black "non-rust" paint, a most satisfying persnickity job one must accomplish with a very small brush. It is the editorial finishing touch.

And I will finish now, for tonight. Mas Blanc is resting under a sky filled with stars, and a moon that is filling out nicely. A good way to end the day.
Posted by Le Mas Blanc Writer's Retreat at 22:09

It has been a warm dry autumn here, and although the level of water in the river (well, stream) Ourne is at the lowest I've ever seen it in fourteen years, there's still enough blow the old mill across from us for my neighbour to enjoy getting out his little "boat" occasionally for a nice end-of-day float...This shot was taken only a week or two ago. 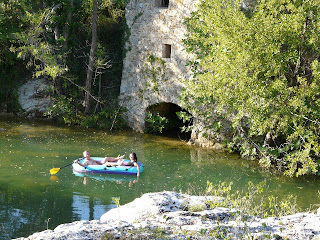 But the light is shifting now, there's a change in the angle of sunlight flooding the south terrace...nevertheless most days this month, when there haven't been visitors to Mas Blanc, I've been able to sunbathe in the early afternoon. However, there have been so many visitors  -- Australians following Canadians for the past several weeks -- that my tanning hours have been severely curtailed. However, I am not complaining, as the good company has been a tonic, and some of these friends have lent their hand to various chores on the property.  When my friends Garth & Annie from Victoria were here, Garth did some serious cutting of bamboo that grows below the north terrace. It was getting so tall it obstructed the view of the river, and now that the poles have been stripped of their branches, they'll be of use next year in the garden to stake out the tomatoes. 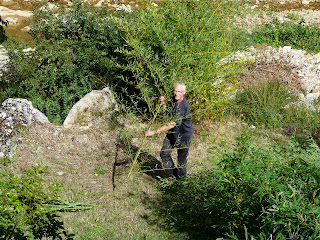 This year's garden is pretty well over now, with only the kale still in the ground and a few cheerful cosmos still blooming, such gorgeous shades of rose and cerise. They make a good bouquet for the kitchen window, especially when combined with the deep purple of wild sage that is having a second round this season.  I am always sad to see the sunflowers go, and they seem equally sad, as you see here... 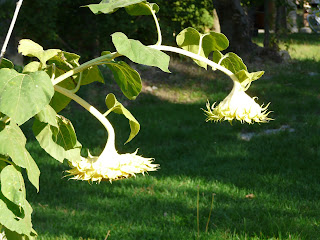 When my friends Scott & Heather from Ottawa were here, I took them down to see the old wine cellar beneath the house, which has been dated at 1598, as there was a pottery on this property at that period and there is evidence pointing to the existence of this cellar (thanks not to my research but that of an historian who was writing a book about local potteries and asked to see and measure our cellars). My husband Bob enjoyed collecting wine from the region, and this was a perfect place to store his discoveries...And the cellar has always had a particular ambiance, because of a  high shelf lined with VERY old bottles that we never touched for fear of them tumbling down. "Is that sawdust?" asked Scott, as he looked at the shelf and indeed, it does seem that deterioration is in progress, and the shelf must be replaced. Since this photo was taken I've removed all the bottles, but they'll go up again once the new insect-proofed shelf is in place. 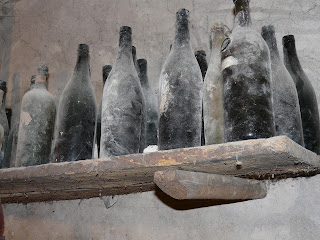 There are a few more photos to share, I'll save them for another post. Now I am going for a walk up past the spring where the sign says that the water is not tested, but everyone comes to fill their plastic containers anyway... and so far no one has died as a direct result.... (well, as far as I know...)
Posted by Le Mas Blanc Writer's Retreat at 16:20