Terrible word, shingles... Since I was diagnosed by a nice young doctor last week, it has made me feel as if I am a delapidated building covered in overlapping grey cedar shakes or worse, those pebbly oblong tiles of black tarry-asbestos. As my friend Pen declared in her email yesterday, I've been roofed....

And yes, I've tried to imagine a lovely shingle beach somewhere on the south coast of England, with the waves moving the smooth stones in a rhythmic growl... but it doesn't work.

Better by far to suffer the indignity in French, in which case I have come down with zona, the reactivation of the chicken pox virus I had as a child. I am in the zone and the zone is pain, surprising pain.

I won't bore you with all the information about this malady gleaned from GOOGLE and well meaning friends, just to say that my particular variety has limited itself to my scalp, ear and throat, and my eyes appear to be safe. However, the random shocks of electric nerve-pain are quite extraordinary,  as if some mad sadist is attacking the back of my head with an electric drill.

Enough. In times of trouble, what to do? Look out into the world and see what joys might be available close at hand as diversion from too much inward-dwelling. And for me, lying abed early morning, this is what I saw...mysterious shapes, leading my imagination in many directions....I seemed to be watching fleshy human bodies in configurations so odd and disturbing I thought of  Michelangelo's paintings let loose and gone off the rails, turning into Lucien Freud's paintings, and then into the grotesqueries of Francis Bacon's figures.. but there were moments of beauty too that were perfectly Rubenesque and then for a few moments, a silky Japanese hanging on which perfect golden leaves sailed down a dark black stream. 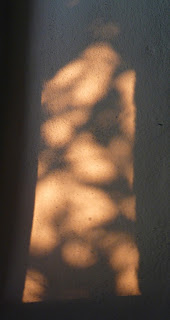 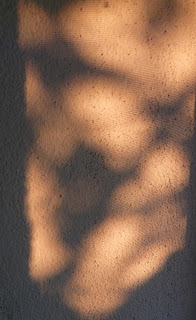 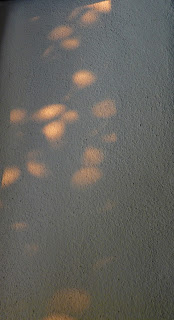 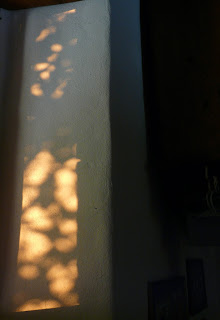 But of course this strangeness was all a result of early morning light coming in the screen of the bedroom window, filtered through the leaves of the micocoulier tree. So ordinary and so bewildering, so magic.