Yes, that frog again.
You know I took him outside and told him not to come back?
Well he did. Just like someone who clings on to a love affair that is SO over, this little critter would not take "no" for an answer.
Found him yesterday, in the laundry room, quite dessicated and a rather sickly colour, his tiny body hunched up under a damp sponge mop. Clearly, it was the only place he could find some comfort, but as I'd used that mop earlier to clean the kitchen floor, there was a strong aroma of MR CLEAN evaporating in the air around him.
"You stupid frog," I said, but in a kindly tone, as I used a dishrag to scoop him up and take him outside again.... and this time set him in the flowerbed at the bottom of the stairs, a lovely place full of mint and basil, paradise compared to a sponge mop.
And did he say thanks? Nope. Bounded off, his mind probably damaged by inhaling chemical fumes.  I wonder if he'll be back again.
Made me think how we humans so often continue to look for comfort even in the wrong places... how we don't listen to good advice and persist in believing that we know better than anyone else what we need. Well, that may well be true, but my adventures with Mr. Frog (okay, maybe it was Ms., but there did seem something truly masculine in his persistence) have reminded me to think carefully the next time I continue on an obsessive course. When is an obstacle something to be surmounted, and when is it a good reason to take a different direction?
Next time he turns up, I intend to have a deep philosophical discussion with la petite grenouille (the word is feminine in French, maybe that's a clue).....

I seem to be often visited by small creatures this season, and here is a baby bird who came to rest on my kitchen windowsill. I think it might be a very young redstart, but am not so good on avian identification that I can say. Sweet as butter, it sat there for a while and then flew off, leaving a small smear of poo on the sill. Thanks! 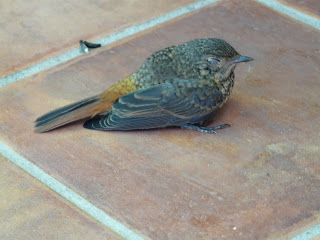 And this is the season when the garden thrives. This photo, taken last week, shows the space well weeded in preparation for the mulch of straw that goes down this week. Already I've had a small harvest of beans, a few cherry tomatoes, and several courgettes, not to mention a head of lettuce every day for good measure.
La vie est belle. 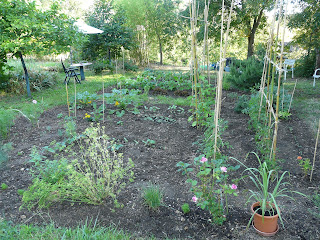